Pastor Yonggi Cho was born on 14th February, 1936 in Southern part of Kyongsang Province, Woolju Town, Sam-nam Kyodong village. He was born from his father, Cho Doo Cheon, and mother, Kim Bok Sun as the first born of 5 brothers and 4 sisters. He learned a lot from his father who was very knowledgeable in Chinese, Confucianism, and Buddhism.

Although he graduated Busan Dong-rea Middle School with an excellent grade, due to his father’s failure in the election of the House of Representatives and family’s financial difficulty, he entered into a vocational school called Busan Technical High School.

Fortunately, there was an American Military Camp near-by the school that he could learn English from American soldiers. So he occasionally translated in between the school principal and the Military Camp Commander.
However, when he was 17 years old, he was diagnosed with pulmonary tuberculosis and had only a short period of time to live. Yet he still ignited the will of life on his bed by studying with English dictionaries and textbooks. One day, he was visited with his sister’s friends and he heard the Good news and accepted Christ as his personal Savior. But for the meantime, his illness was still the same that he went back to his hometown for fresh air and better rest, and he commuted to the hospital in Busan City.

One day, he attended a crusade led by an American missionary, Ken Ties, on a Busan street and received grace. Afterwards, he helped him in interpretation, read lots of Christian books, and began to realize the truth of the gospel. But he did not have the assurance of faith that he decided to fast and pray earnestly. One night while he was fasting, he met Jesus who appeared to him like a bright light in his vision and experienced the baptism of the Holy Spirit.
The night Pastor Yonggi Cho met Jesus, he was called as a preacher of the gospel. He came to Seoul to study theology in 1956 and entered ‘Full Gospel Theology Seminary’ at the top of the class. In the seminary, he met his ministry partner and the future mother-in-law, Pastor Yonggi Cho Ja Sil.

Pastor Yonggi Cho who graduated Full Gospel Theology Seminary in 1958 planted a church on the outskirts of Seoul together with Pastor Yonggi Cho and her three children on 18th May.
As the church grew more and more and got to the number of 50 people in church, they built a tent and put a straw mat, and had a worship service inside the tent sitting on the mat. Despite the coldness in the winter, the church devoted themselves to All-night prayer and Early Morning Prayer in the tent church and went out to evangelize people in the day time.

Pastor Yonggi Cho preached the message of Threefold Blessing to the sick and poor people whose life situation became miserable after the 6.25 Korean War that they might enjoy good health and all might go well with them as their soul was getting along well. The power of the Holy Spirit strongly came upon them that all sort of sickness was healed, and the life of the church became full of hope.

However, when the growth of the church was flaming in January, 1961, Pastor Yonggi Cho received his draft notice. Within 3 years of time the church grew to four hundred people that the church had bought approximately 2000m² of land to build a chapel, so it was very difficult for him to go to the military. A few days before he joined the army, he entrusted the church to a missionary, John Huston, who came to the tent church by the guidance of the Holy Spirit. Then, he joined the army in January of that year. During his service time, he had a serious enteropathy that he had a major surgery in the army military hospital and transferred to Daejeon 63 Hospital, yet he did not get better that he was discharged from service due to his disease. That was when he did his service for 7 months.

Seodaemoon Church and the Origin of Cell Structure

It was not long enough for Pastor Yonggi Cho to recover from his surgery, yet he interpreted for Pastor Sam Tort in a revival meeting at Seodaemoon Rotary. Two weeks later from the revival meeting of signs and wonders, Pastor Yonggi Cho built a tent and started his second ministry there. In November, 1961 the chapel which seated 1,500 people was completed, and on the 18th of February, 1962, they named it the “Full Gospel Revival Hall” and had a dedication service. The same year on April 26th, Pastor Yonggi Cho was ordained and they changed the name of the church to “Full Gospel Central Church” on May 13th.

The church grew to 3,000 in 1964 which was 3 years after the church was moved to Seodaemoon. The next year, Pastor Yonggi Cho was married with the daughter of Pastor Yonggi Cho, Kim Sunghae, on March 1st, 1965. However, Pastor Yonggi Cho who had been putting the best of his efforts into the pastoral ministry could not take care of his health and collapsed one day while he was baptizing hundreds of people. But he left the hospital within a week in order to preach on Sunday, and he fainted again and was admitted to the hospital again. When he was faced with his physical limitations, he realized the meaning of Exodus 18:18 “The work is too heavy for you; you cannot handle it alone” whereby Moses appointed some officials over thousands, hundreds, fifties and tens and delegated the work to them. He also learned that the early church used to pray and fellowship together in their houses, and realized the importance of raising lay leaders, especially women, in the church. (Romans 16) This became the catalyst of changing the future of the church. The following week, he told all the officials about cells and built a cell structure. He divided Seoul into 20 big districts and told them to have a worship service in their houses with the church members who lived nearby them. When the church educated and appointed women as cell leaders, it contributed tremendously to the growth of the church. Consequently, men in the church were greatly challenged by the growth of the women cells that they also started their cell meetings. (Today, this district cell meeting is expanded to youth and children cells and the number of adult cell leaders, both men and women, is approximately 13,660.)

After 3 years from building the cell structure, the church grew to 8,000 members that they split the Sunday service into three services. But the church outgrew the space in the church that they could no longer afford to meet with all the members. So Pastor Yonggi Cho bought some land in Yoido and decided to build a new church building. Yoido at that time was nothing but an island of sand and the communication facilities were so poor that many people criticized him and said it was an ill-advised plan. Moreover, the construction cost was 800,000,000won, yet the church only had 1,000,000won. Nevertheless, Pastor Yonggi Cho believed in the God of miracles and made up his mind to raise funds for the construction of the church. The Assemblies of God also accepted the will of the church and bought the land with a postdated check. The construction began in April, 1969.

Once construction work for new sanctuary in Yoido began, the oil shock broke out in Arab, and the value of the currency, Won, fell against the dollar. In accordance with that, the price of building materials rose steeply and many of members of the church lost their jobs. This led to a decrease in offering and a loan from bank; hence the pressure of debt came to the climax. Also architectural technique problem contributed to interruption of the construction work.
Pastor Yonggi Cho fainted on the cement floor numerous times as he cried out to the Lord at the basement of the sanctuary which only framework was completed by then.

Then, ‘Saving the Church Movement’ arose among the members, and hundreds of them fasted and desperately prayed every evening at the basement altogether.
As a result, the sanctuary which could accommodate 10,000 people was finally built up and was consecrated on 23th September in 1973. When Yoido Sanctuary was completely built in 1973, Prayer Mountain which has been considerably contributes to Church’s revival was built as well.
As more and more people visit Prayer Mountain, another new sanctuary which had 10,000 seats was built and dedicated in September, 1982. Prayer Mountain where Pastor Jasil Choi used to fast and pray all night at a churchyard in Paju, Gyeonggi Province grew up to today’s International Fasting Prayer Mountain which nowadays more than 3,500 church members and 10,000 foreigners are annually visiting. Since the church moved to Yoido, the church expanded drastically. In 1979, the number of church members reached 100,000, and the figure became double in 1981.
1st and 2nd Education Buildings were constructed for the church’s internal maturity and education. Also Mission Center was built in order to train missionaries and send them for overseas mission.
In 1984, the official name of the church was changed to ‘Yoido Full Gospel Church’ and the members grew up to 400,000. In 1992, the figure became 700,000. YFGC built several satellite churches and helped many churches to be independent as an effective way of evangelizing local communities.

Pastor Yonggi Cho gives thanks to the Lord for the years of his ministry, and has been sincerely serving 750,000 church members. In the early 21st century, the church's goals for next 10 years are to build 500 prayer houses and 5,000 satellite churches in Korea, and to expand global mission through internet broadcasting, and to enlarge overseas mission to the third world countries, including North Korea. For these goals, Pastor Yonggi Cho has been praying and chasing faithfully after the Holy Spirit with all of the church members. 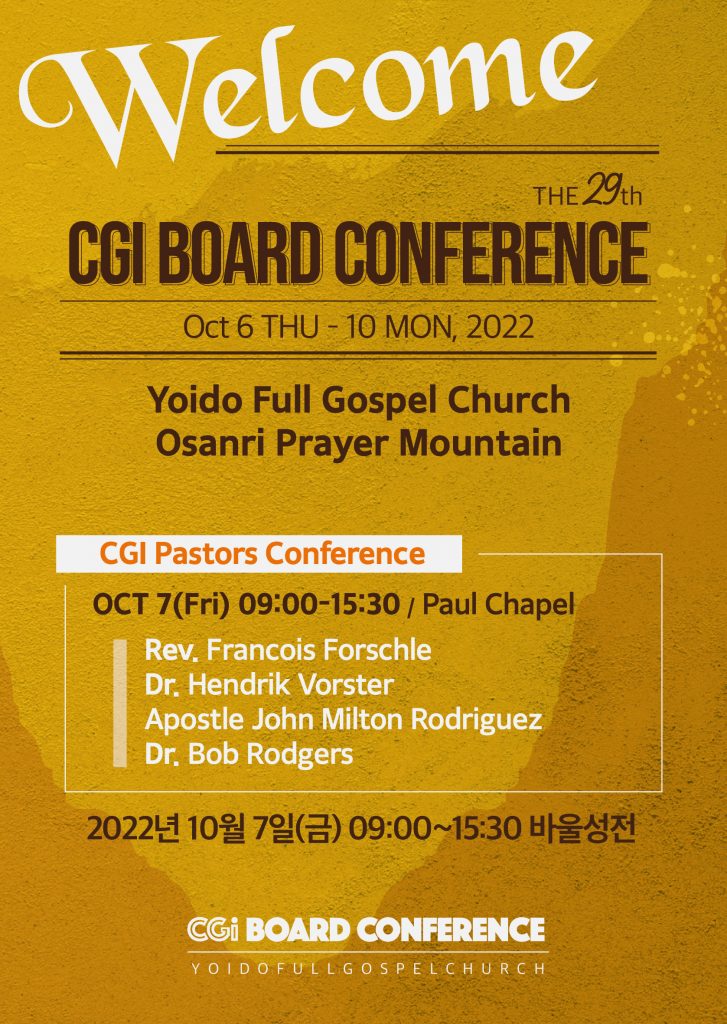